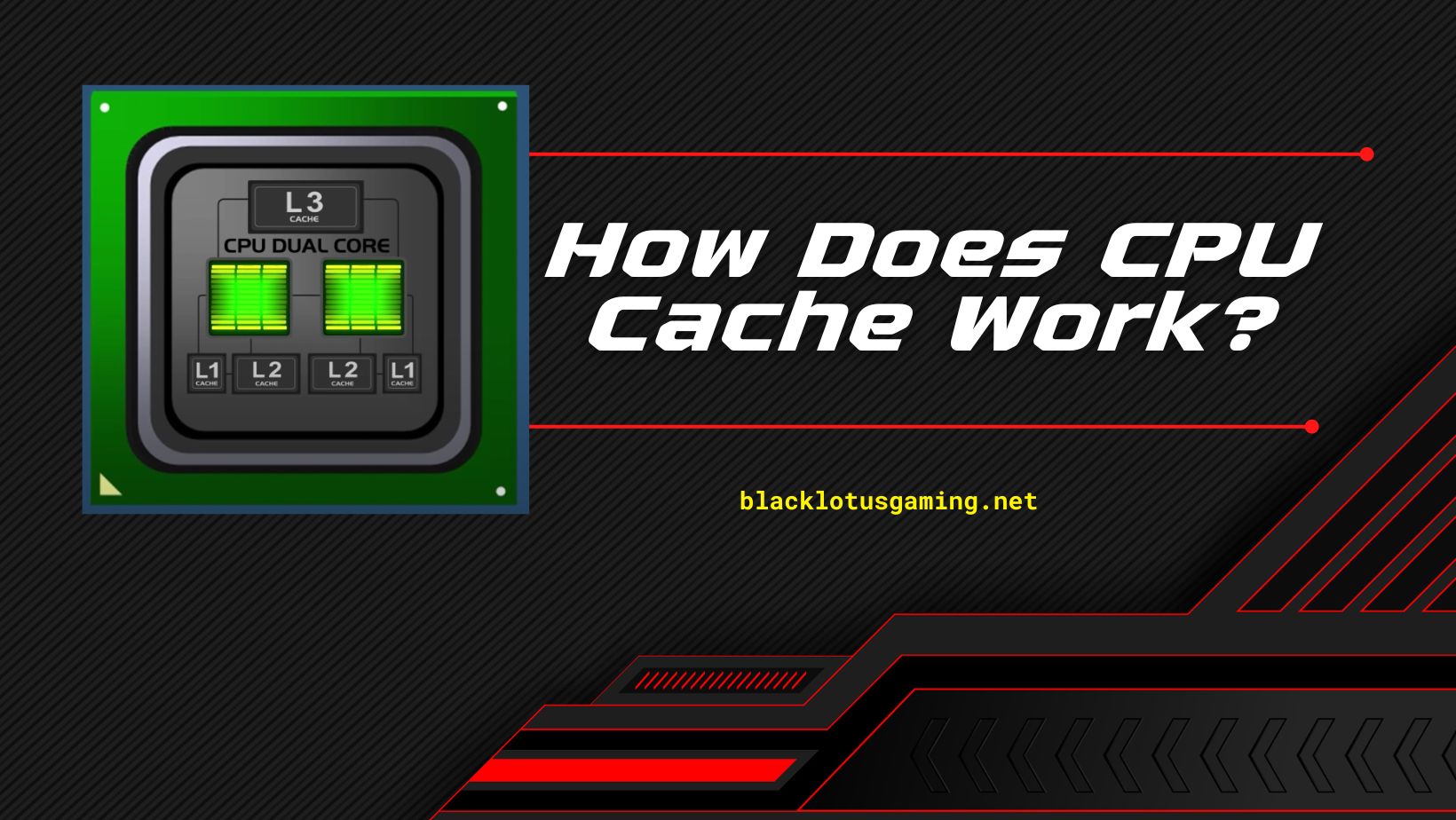 When checking out any new processor, there’s a high chance of you seeing the terms ‘L2 cache’ and ‘L3 cache’ in the specs section.

What is Cache Memory?

Cache memory is a type of computer memory that stores frequently accessed data to retrieve it quickly.

This is done to speed up the performance of the system.

Where Is Cache Memory Located?

Cache memory is usually installed on the motherboard or in the processor itself.

How Does CPU Cache Work?

How Does CPU Cache Work? What are these, and how do they affect CPU performance?

To understand this, we’ll have to go back in time first.

In the early days of computers, both the CPU and main memory were slow. Things started to change in the 1980s, with processors increasing clock speed each year, which led to performance increments.

But there were slower advancements in the RAM area, which increased the performance gap between the two.

To bridge this gap, cache memory was invented.

It’s a form of Static RAM (SRAM) that can store data without needing to be constantly refreshed, unlike Dynamic RAM (DRAM), which constantly needs to be electrically refreshed and is used in RAM modules these days.

Being part of the CPU itself, it’s the fastest memory to be used in a computer. Its job is to copy common data/instructions from the RAM that it thinks the CPU will access soon.

After this, CPU always checks the cache first for its required data before moving on to RAM memory.

There are three types of cache memory:

Some processors may also have L4 cache, which functions similarly to L3 cache but is located on an external chip instead of on the processor itself.

Let’s go a little bit deeper into the different types of CPU cache..

L1 cache is the fastest CPU cache out there and this is the place where the data/instructions, which CPU is about to use, are stored.

It’s measured in KB and its size varies from processor to processor.

Next comes the L2 cache. It’s bigger but slower than L1 cache, this is where CPU searches for its required data/instructions if it can’t find them in L1 cache.

Unlike L1 cache, L2 cache is not divided into data and instruction caches and acts as a combined repository. Its size also varies from 256 KB to 8 MB depending on your processor. The Ryzen 7 5800X comes with 512 KB L2 cache per core (Total: 4 MB).

This the last cache memory CPU searches before moving on to the computer’s main memory (RAM).

Back in the days of single-core CPUs, L3 cache was a part of the motherboard. But now it’s available on the CPU itself, like L1 and L2 cache. Being on Level 3, this cache is slower than L2, but is significantly bigger in size.

Unlike L1 and L2 caches where each core gets one for its own, there’s only one L3 cache memory in a CPU that is shared among all of its cores. Mainstream processors such as 5600X and 5800X have 32 MB L3 cache, but some flagship desktop/server processors can have 64 MB L3 cache.

First, we have permanent storage devices like HDD and SSD that store our files, software, games, and OS. Next, we have the main memory, aka RAM. This is a faster, short-term memory that retrieves data from the hard drive/SSD.

The CPU first searches for the data in L1, then L2, and then L3. If the CPU finds its data in any of those levels, it’s called a cache hit. But if it’s unable to do so, it accesses the RAM for the data, and this event is known as a cache miss.

Modern CPUs have L1 cache hit rate of 95%-97%. But since L2 has significantly higher latency than L1, this 2% cache hit difference can result in a 10% performance difference.

How Much CPU Cache Do I Need?

You need as much cache as possible.

The more cache you have, the less time your processor waits for data to be fetched from RAM, improving performance.

However, it is important to note that having too much cache can also cause performance issues and may not be necessary for your specific needs.

It is best to consult with a professional or research your specific processor and workload requirements to determine the optimal amount of cache for you.

Additionally, keep in mind that upgrading your CPU may be a better solution than just increasing the cache.

How Does CPU Cache Work, And How Much Cache Memory Is Good?

As much as possible! The more cache memory your computer has, the faster it can access data.

However, too much cache memory can cause performance issues, so it’s important to consult with a professional or research your specific processor and workload requirements to determine the optimal amount of cache for you.

How Does CPU Cache Work, And Does Cache Affect Gaming

Gaming generally involves a lot of repetitive tasks that can be processed quicker if your processor has a bigger cache.

With that said, you can’t consider the cache size as a standalone specification, as gaming performance depends on many other factors, such as clock speed and the number of cores.

Other than this, different CPUs have different cache implementations. Therefore, you can’t directly compare two CPUs only through their cache sizes.

Like most PC hardware components, CPUs come with better yearly specs, including their cache memory.

So, make sure to consider factors like clock speed, microarchitecture, and cores/threads count, in addition to the cache size, before purchasing any new CPU.

A CPU cache is a small, fast memory that resides on the processor.

It stores recently accessed data so that the processor can access it quickly and without waiting for it to be fetched from the main memory.

This reduces the time required to complete tasks and improves system performance.

This article looks at how CPU cache works and what you need to consider when buying your PC components or system architecture. We hope you found our guide on how does CPU cache work helpful!