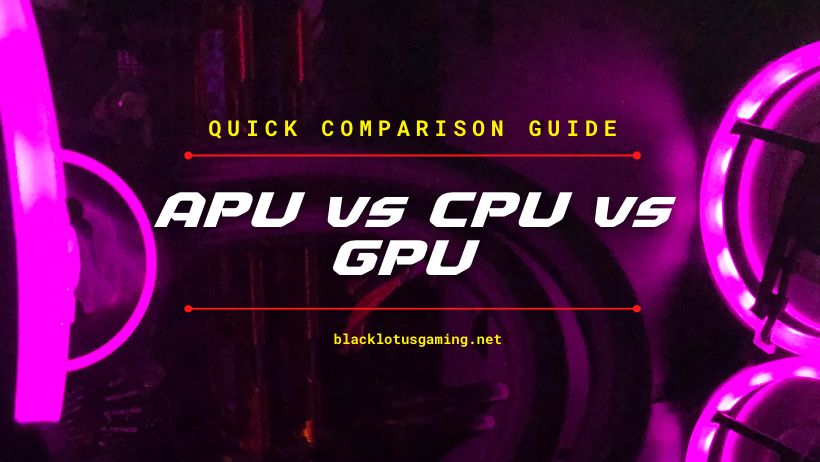 For those looking for a short answer, a CPU is the brain of a computer that enables it to interact with all other pc hardware, whereas a GPU is responsible for handling Graphics rendering.

An APU, a CPU-GPU hybrid combo, can do both functions. It is power and cost-efficient but not as powerful as a standalone CPU or GPU.

But what’s the difference between them? And which one is right for you?

But this is just the tip of the iceberg. Keep reading if you want to have detailed information about APU vs CPU vs GPU.

The Central Processing Unit (CPU) is the brain of the computer. You must have heard about its functions in your childhood.

So what does it do?

Primarily, it fetches the information as input from RAM. It then processes that information and generates an output based on that input.

It performs all the important functions that you can think of, inside a computer. If you are working on excel calculations, the CPU is the brain behind it.

If you are writing code for a new application, the CPU will be the one handling it.

Even if you are doing basic operations like shutting and opening your windows or programs, the CPU is the reason for it happening.

CPUs are further classified based on the cores and threads they come with and their clock speed.

Generally speaking, a CPU with a higher core/thread count and clock speed will perform better as these features allow a CPU to process more tasks at once- and faster.

The central processing unit is responsible for fetching, decoding, and executing instructions and managing tasks such as memory storage and input/output (I/O) operations.

In general, a CPU is composed of two parts: an arithmetic logic unit (ALU), which performs mathematical and logical operations, and a control unit (CU), which manages the sequence of operations that take place.

CPUs are typically built into a single integrated circuit (IC) known as a microprocessor.

One of the most important things to consider when purchasing a CPU is its number of cores. A core is a single processing unit within a CPU; in other words, it’s a single thread of execution.

Graphics Processing Unit (GPU), also known as the graphics card, is the thing a gamer would desperately want these days.

As the name suggests, it is in charge of the graphics. The games are all about the graphics. Playing a game that is either buffering or has a bad resolution could lead to a terrible gaming experience.

You would want the visuals to be at least attractive to keep your mind focused.

The GPUs work on a similar note to the CPU, as both of them process data. But while the CPUs are designated to work for generic tasks, the GPUs are assigned tasks for a specific purpose – computer graphics.

A GPU is a specialized type of IC designed to process mathematically-intensive tasks associated with 3D graphics rendering rapidly.

GPUs are often used in conjunction with CPUs to offload computationally demanding tasks; this arrangement is known as heterogeneous computing.

Unlike CPUs, GPUs typically have hundreds or even thousands of cores. However, these cores are much less complex than those found in CPUs; as a result, they’re able to operate more efficiently on highly parallelizable workloads.

Not only that, both of them have different approaches to processing data. While CPUs consist of single/multiple cores to perform tasks sequentially, GPUs have thousands of small processors for parallel processing.

The GPU comes in two forms; it can either be dedicated or integrated. The dedicated graphics card has its own RAM and is connected to the motherboard via the PCI Express (PCle slot). On the other hand, integrated GPUs are part of the system and use system RAM to carry out the graphics tasks.

Needless to say, dedicated GPUs are miles ahead of their integrated counterparts in terms of performance. Even the most recent GPUs like Intel UHD 750 can’t give you the performance of an entry-level dedicated graphics card.

Although most people associate them with only gaming, GPUs can be equally helpful in tasks like content creation, video encoding, 3D processing, and Artificial Intelligence.

Accelerated Processing Unit (APU) is the term coined by AMD way back in 2011. These chips are a combination of the CPU and the GPU, as they have CPU and GPU cores on the same chip.

These chips are cheaper to produce and much more efficient due to reducing the physical distance between the CPU and GPU parts.

An APU is effectively a CPU and GPU packaged together onto a single die. This allows an APU to offer improved performance over a traditional CPU-GPU combo by reducing latency and increasing data throughput between the two components.

In addition, APUs typically consume less power than their CPU-GPU counterparts due to their smaller size and more efficient design.

One big difference they have with CPUs is the integrated graphics part.

The vega graphics unit found in Ryzen 3200G/3400G is significantly more powerful than any traditional iGPU unit, including the latest Intel UHD 750.

They give you enough graphical power for casual gaming (at 720p, for example) but still can’t be compared to dedicated graphics cards, even midrange models.

It means they’re not suitable for 1080p gaming or beyond.

One downside of APUs is that they tend to be less powerful than discrete GPUs; however, their lower price point and smaller form factor offset this disadvantage.

As such, APUs are popular among casual gamers and budget-conscious consumers.

Final Thoughts On APU vs CPU vs GPU

So there you have it: a brief overview of APU vs CPU vs GPU. If you are on a budget and want good performance stretched out of it, we suggest using the APU. It can work for casual 720p gaming.

But if you can spend more on your budget to build your PC, the recommendation would be to go separately for the CPUs and GPUs.