The Corsair 275R Airflow is a mid-tower chassis with a minimalist design.

It aims to give you tempered glass side panel, good thermal performance out of the box, and plenty of AIO options in a compelling price.

This is a big reason why many users opt for it when building their PCs.

However, selecting the chassis is only the first step in building a PC, and your next steps should be shortlisting the remaining PC components compatible with 275R Airflow, including a motherboard.

Being a mid-tower case, the 275R Airflow is compatible with ATX, mATX, and mini-ITX motherboards. But you would still have to choose among different chipsets and select whether you want to go with Team Intel or Team AMD.

Below you’ll find our recommended motherboards for this chassis.

The first motherboard we have is the MSI’s MPG X570 Gaming Plus. It has X570 chipset and is compatible with both Ryzen 3000 and 5000 series CPUs.

Coming in MSI’s typical black/red scheme, it’s one of the cheapest motherboards to come with X570 chipset. Despite this fact, it has all the features most of us need these days.

The first thing you’ll notice in this board are two decent-sized VRM heatsinks to keep that area cool.

Below these heatsinks, you’ll find the VRM setup which consists of 8+2 power phase design along with an International Rectifier IR35201 PWM controller and two 12V CPU connectors (one 8-pin, one 4-pin) to supply extra power if needed.

This is not the best VRM setup but will certainly help you overclock the ryzen 5/7 processors with ease.

There’s one more heatsink in this board which is attached to the chipset fan. It’s mostly due to the fact that X570 chipset can get hotter than the X470. That’s why many companies are trying to actively cool this area.

On the right side of this heatsink are the two full-length PCIe 4.0 slots that operate at x16 and x16/x4 mode respectively. Due to these multiple x16 slots, you can have a two-way crossfire multi-GPU setup on this motherboard.

Apart from these, X570 Gaming Plus also has three PCIe x1 slots and two PCIe x4 M.2 slots (only one of them has the heatsink). For conventional storage, it has standard six SATA ports.

Like any other consumer motherboard, it has four DIMM slots that can take up to DDR-4400 memory with a combined capacity of 128 GB (32 GB for each).

In case you want to use a Ryzen APU with X570 Gaming Plus, there’s an HDMI video output for this. Lastly, we have the five audio jacks and flash BIOS button.

As said earlier, the X570 Gaming Plus has all the bases covered despite bing a budget motherboard. While it’s true that many high-end bells and whistles are missing, these are not deal breakers.

And if you’re on a tight budget then this motherboard is definitely worth consideration. 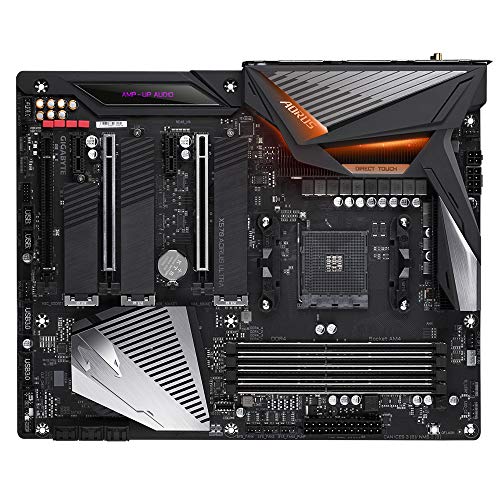 In case you have extra budget but want to stay in team red, then you can check out the X570 Aorus Ultra by Gigabyte.

It has a simple design with black color used for the most part, along with some silver brushing on heatsinks. Despite being labelled as a gaming motherboard, RGB lighting is implemented in a very small amount.

It comes with a 12+2 VRM setup consisting of 40A PowIRstage IR3553 MOSFETs and Infineon IR3599 phase doublers, and should be able to overclock any Ryzen 3000 and 5000 processor comfortably.

The problem with such VRM setups is that they get hot quickly. This is most probably why both VRM heatsinks in Aorus Ultra are connected to form a single huge heatsink and dissipate heat quickly.

The left VRM heatsink is further extended to the I/O shroud.

Other than this, you also get two WiFi 6 antennas (for 802.11ax + Bluetooth 5 connectivity), usual audio jacks, and an ethernet port.

It comes with three full-length PCIe slots and support two-way SLI and three-way Crossfire. The top two are metal-reinforced and operate at x16 and x8/x8 modes, while the bottom one has no reinforcement and operates at x8/x8/x4 speed.

Furthermore, there are two PCIe x1 slots and three M.2 slots. The good thing about the M.2 slots is that each of them has its own heatsink to keep the temperature level in check.

The only complain we have with this otherwise perfect motherboard is the lack of 2.5G ethernet port.

Overall though, it’s the best motherboard for corsair 275R airflow if you intend to use an AMD processor.

Despite experiencing turbulence in recent times, Intel is still the preferred choice for many PC builders.

If you fall into this category and want to have an Intel-based motherboard in 275R Airflow, then Asus’ B560M-PLUS WiFi can be reasonable option.

As its name suggests, it’s a B560 chipset based mATX motherboard.

The reason why we choose this particular motherboard is because a) it’s compatible with both 10th and 11th-Gen processors, b) its smaller size means more compatibility headroom, and c) it doesn’t cost much.

Like other TUF series motherboards, B560M-PLUS WiFi has a black-colored PCB with grey diagonal patterns. Yellow color is also used but in a very light manner, and makes the design extra catchy.

This motherboard isn’t meant for heavy CPU overclocking which is why there’s only a single 8-pin CPU connector available.

On the top-right corner, you can find aRGB and RGB connectors which allow you to use both addressable as non-addressable LEDs with this board.

There are two more RGB headers that can be found at the bottom edge of the board, along with front audio header, Thunderbolt 4 header, two fan headers, two USB 2.0 headers, etc.

Having RGB and fan headers on both top and bottom side of the board make cable management much more easier.

The B460 motherboards used to have top ram speed of 2933 MHz in OC mode. Thankfully, some changes have been made in its successor chipset that allow boards like this one to support up to 5000 MHz ram speed in OC mode.

There are two PCIe x16 slots located on the lower side. The top one is metal-reinforced and operates at PCIe 4.0 standard, while the lower slot is a regular one and is limited to PCIe 3.0.

Alongside these x16 slots are the three PCIe x1 slots and two M.2 slots.

Again, in order to cut down costs, only the top M.2 slot has a heatsink. But that’s not a big issue unless you have serious airflow issues, which you surely won’t with 275R Airflow chassis.

Can the Corsair 275R fit an ATX motherboard?

Yes, the Corsair can fit ATX as well as mATX and mini-ITX motherboards. But ATX models should be preferred as it’s made for these motherboards by default.

Does the Corsair 275R have good airflow?

Thanks to efficient internal layout and spacious interior, the Corsair 275R has good airflow out of the box.

Does the Corsair 275R airflow come with standoffs?

Yes, it has nine standoffs preinstalled to raise the board off from the metal case.

How many fans can the Corsair 275R airflow?

It comes with three 120mm fans (two intake and one exhaust) out of the box. But you can install up to six fans, or rads up to 360 mm size, if you want to.